The Share 2 Conference took place in Belgrade through April 26 – 28, inviting speakers such as Isak Gerson, Aubrey de Grey, George Hotz, Eben Moglen, Khannea Suntzu, Andrew Keen, Bruce Sterling, Smari McCarthy and many others, discussing social media, internet activism and the internet infrastructure built to – share information, share our emotions, share data – and share all the attacks to the integrity of our social life.

During the three days of the conference, I was actually sad for not having a Facebook account because I couldn’t delete it, as most of the Share speakers suggested us to. Whether web may be making us dizzy, spinning, in a digital vertigo as Keen believes, or spinning in love, getting married by the power vested in the Kopimi priests by the holy event of copying information, or virtually, ending aging – we can feel that some of our autonomy is now boxed within the parameters set by the net – or at least, we chose to share, during those three days, our experiences of living as netizens – whether we feel more controlled or liberated in a digital environment, or just seeking a “dark space” to escape this transformation of our daily life.

To Each His Own Yarn 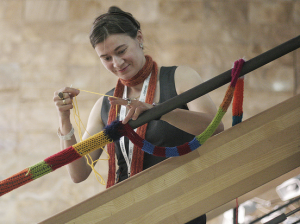 Switching lecture halls as differently as we’d all switch tabs in our browsers, I believe each of us will spin a different yarn of the Share 2 experience – and agree with everyone else, perhaps, only, on the good taste of the “free for all” apples presented in the hallway and the overall mind indulging atmosphere created by Belgrade during the festival. A festival, because the music experience was made as intricate as the idea of rethinking future internet scenarios through blogs, books, live performances, politics, or art. “Art is,” Eben Moglen says, “what brings the future forward, allows us to play with ideas,” and, as always, “we plan things with the aid of science fiction.”

Whether by questioning the copyright paradigm and moving away from the copyright lobbying group and the values set by “the old”, testing the idea that “the copying event is holy” like Kopimis do, or questioning the aging as “the side effect of living” as something we could end – we are redefining the logic of reasoning behind our own reality, in order to better pursuit future wisdom, to better imagine the possible future scenarios. One of the scenarios would be not to try and prevent the damage to the metabolism, in order to escape our own pathology, but to intervene, by eliminating the damage itself, like the SENS foundation is trying to do (Aubrey de Grey, founder), since it is easier to describe damage (at SENS, they describe 7 deadly things accumulating in our body) than to understand completely the way the body works.

In another scenario, where we can recognize a seamless network “of things” (Rob Van Kranenbrug, Internet of Things) – of cars, of cities, of washing machines communicating – the idea is to leave this network open, and not enclosed in the hands of one middleman, one government, or one or two states (and Moglen will use examples of USA and China), that can choose to act in their un-wisdom. Moglen argues, in a dooming scenario where big data is collected about each citizen, that “we need to reposses the web away from the man in the middle.” Otherwise, our memories will become inferior to this “big data” because what is collected will not be forgotten. “Media consumes us”, he concludes, “watching us watching it,” and the freedom of thought may be lost forever if there wasn’t anyone left running free software, securing free (un-surveilled) media, leaving the seamless network – open.

Again, the ramblings are my own.