About Glioblastomas And Future Developments on Cancer Cures

Dr. Marc-Eric Halatsch, Professor of Neurosurgery and a member of several  professional organizations such as the German National Academic Foundation,  was active as the German representative of the Young Neurosurgeons’ Committee of the European Association of Neurosurgical Societies (EANS) from 2003 to 2007.

Senior consultant in the Department of Neurosurgery at the University of Ulm, Dr. Halatsch agreed to talk to InTech about  particular forms of brain tumours,  current developments in cancer cures, Open Access and his own future projects in his field of study. Together with Dr. Georg Karpel-Massler, Dr. Halatsch is the co-author of the chapter titled “The Molecular Basis of Resistance to the Antiproliferative Effect of EGFR Inhibition in Human Glioblastoma Multiforme Cell Lines“, taken from InTech’s recently published book “Brain Tumours-Current and Emerging Therapeutic Strategies“, edited by Ana L. Abujamra.

Several categories of brain neoplasms exist, among them primary and secondary, intra- and extra-axial as well as benign and malignant brain tumours. Primary intra-axial brain tumours originate from mutated specific cells that are constituents of the brain tissue whereas secondary brain tumours are metastases from primary tumours present in other organs. Extra-axial tumours often stem from the brain’s coverings, the meninges. The tumours’ biological behaviour is reflected by the World Health Organization’s classification with four grades where grade I refers to a benign and grade IV to a malignant tumour. Unfortunately, the most common primary malignant brain tumour in adults, glioblastoma, is a grade IV tumour.

InTech: Is there any correlation between brain tumours and genetic heritage?

Familial tumour syndromes are relevant to only a small fraction of brain tumors. The vast majority of brain tumours apparently occur spontaneously, i.e., without inheritance.

InTech: Glioblastoma is the most common form of brain tumour. In comparison to other tumours, what is its frequency of occurrence in the population and what is the rate of survival?

Despite being the most common primary malignant brain tumour in adults, glioblastoma is a comparatively rare tumour that affects around 5 out of 100000 inhabitants. Median survival with maximum therapy is approximately one and a half years, and there is a small fraction of long-term survivors.

InTech: Can you describe the main treatment methods used today for glioblastomas. How effective are these methods?

Standard multi-modality treatment consists of “safe maximal” microsurgical tumour resection (strictly aiming to avoid the creation of new permanent neurological deficits by the surgical procedure), radiation and chemotherapy. Although a slight progress in survival has been achieved in this decade, the situation is far from being satisfactory.

InTech: What are the latest developments in therapeutic strategies for patients suffering from glioblastoma?

InTech: Regarding future advancements in this area of study, how close are we to finding a cure targeted to treat and destroy this kind of aggressive tumours?

Past research has demonstrated that very probably there will be no single molecular target that functions as a “master switch” for tumor destruction and cure. However, the scientific community as a whole is on a very good way to obtaining the “critical mass” of knowledge about glioblastoma required to convert this life-threatening condition into a more “chronic” disease.

InTech: How do you hope your research work will affect the scientific community within this field of research?

My group and I are hoping to be able to identify a few better molecular therapeutic targets in glioblastoma, equivalent to contributing a few pieces to the big puzzle (if we are lucky).

InTech: Tell us something about your future projects.

We are working hard to understand the phenomenon of intrinsic and acquired resistance of glioblastoma cells to traditional and targeted therapies.

InTech: Now that you published under the Open Access label, how do you perceive the benefits of Open Access in comparison to traditional scientific publishing?

InTech: Are you satisfied with InTech as your Open Access publisher?

InTech has exhibited a very high level of courtesy and professionalism throughout the publication process. 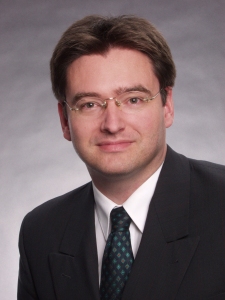 Marc-Eric Halatsch, born in Hannover, Germany, had been an elected member of the German National Academic Foundation (competitive selection of 0.5% of students from all faculties) from 1987-1993.

Marc has received grant support from several U.S. and German sources and has chaired or co-chaired scientific sessions during international oncology meetings. He is co-inventor of the U.S. provisional patent application OS-10018PV (“Combined treatment with artesunate and an epidermal growth factor receptor kinase inhibitor”; license granted on November 15, 2004).

Marc is a Professor of Neurosurgery and focusing on clinical and experimental neurosurgical oncology. Being an active member of several professional organizations, international journal reviewer panels and the selection committee of the German National Academic Foundation, Marc also became the German representative of the Young Neurosurgeons´ Committee of the European Association of Neurosurgical Societies (EANS) for the term of 2003-2007 and completed the international EANS training course.

Professor Dr. Halatsch is a senior consultant in the Department of Neurosurgery at the University of Ulm, Germany, and was awarded the subspecialty certificates “Neurosurgical Oncology” and “Spinal Neurosurgery” by the German Society for Neurosurgery as well as the certificate “Advanced Medical Didactics” by the Federal State of Baden-Württemberg, Germany.