CERN: Open Access To Provide the Missing Ingredient For the Primordial Soup?

Posted on December 7, 2010 by Katarina Lovrečić

Universe of Particles exhibition at CERN - Where Things Flow About

Whenever she [Alice] looked hard at any shelf, to make out exactly what it had on it, that particular shelf was always quite, empty, though the others round it were crowded as full as they could hold. `Things flow about so here!’ she said at last in a plaintive tone.
(Lewis Carroll, In Through the Looking Glass)

Not quite satisfied with a microscope or a looking glass, a group of scientists decided on building the most gigantic and the fastest instruments in order to collide particles. Trying to figure out the recipe for the “primordial soup” and carefully watching to see if the “Big Bang” will happen, those brilliant heads that refuse to leave questions unanswered, gather at CERN, the European Organization for Nuclear Research.

Where the Web Was Born

Not quite a particle nor a Higgs boson, a certain “web” caused the digital “big bang” revolution right at CERN. Tim Berners Lee was a scientists there and in 1989 he made the first proposal for the World Wide Web and info.cern.ch became the address of the world’s first-ever website. Recently, Tim wrote about this same web, trying to remind us that it is “ours” and thus a “public resource” and how we should avoid becoming – disconnected. He called for open standards, which after all, drive innovation. “When the Web began,” he recalls, “I did not have to obtain permission or pay royalties to use the Internet’s own open standards, such as the well-known transmission control protocol (TCP) and Internet protocol (IP).” He warns us that not using open standards creates closed worlds – “walled gardens,” he labels them. In order to strip some of those walls, CERN, together with 20 member states decided to take on the SCOAP3 initiative and thus join the effort of converting to open access existing high-quality high-energy physics (HEP) journals.

The fourteenth institution to sign COPE, following the Simon Fraser University, CERN as a SCOAP3 partner will cancel journal subscriptions and thus finance its contribution to HEP journals. “As a publicly and internationally funded research institution, CERN believes everyone should get access to its results without any financial barrier,” it is stated in their press release. 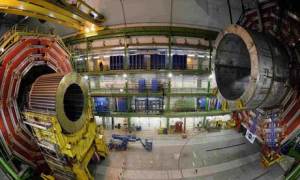 Not focusing solely on journals, “CERN participates in building tools for open access such as INSPIRE, a large-scale disciplinary repository for high-energy physics and the related open source digital library software Invenio. CERN is also coordinating a consortium of libraries, publishers and funding agencies, SOAP, in a large-scale study to identify the demand for and provision of open access and its main drivers and barriers.” Opening access to CERN’s research could provide the missing ingredient for the primordial soup since more “players” could think of more uses for gigantic “toys”.