Posted on October 4, 2010 by Katarina Lovrečić 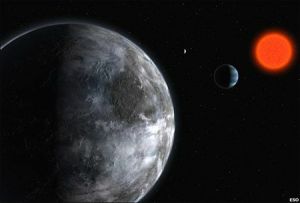 Recently, a habitable exoplanet Gliese 581 g has been found and this notion stimulates a whole new set of ideas for a utopian community of Gliesians. The planet which is three times the mass of Earth is in a habitable zone with conditions just right for reading your favorite Open Journal in the morning with a nice cup of drinking liquid water. Gliese g is one of the six planets orbiting the star Gliese 581, a red dwarf 20 light years from Earth.

“All our science is just a cookery book,
with an orthodox theory of cooking that nobody’s allowed to question,
and a list of recipes that mustn’t be added to
except by special permission from the head cook.”
(Aldous Huxley, Brave New World)

In order to exempt the head cook from the new exo-society and to allow for unrestricted adding to scientific cookery book, Gliesians wouldn’t allow for large publishers with their traditional publishing model to inhabit their planet. Once the problem of setting up the internet technology on quite a rocky planet has been been solved, all of the Gliese journals and books would become Open Access. There would be no one to dominate the market, since all of the Gliese-money accredited to institutions would be invested in publishing the output from Gliese laboratories. With researchers gaining access to every journal ever written, there would be nothing to prevent daily invention of new elements, tools, and other cures for the “pain”. Even if Gliesians started from ground zero with the knowledge of their planet, they would probably soon catch up with “Earthlings” and takeover the place of the most knowledgeable inhabitants of the solar system.

Gliese libraries would hold an ever growing number of books, journals, and video and audio material. In other words, they would become one giant Open Access repository – a digital home for Gliesian world of knowledge as they know it. Since there would be no need for librarians to spend the money on subscriptions to journals, they would invest exclusively in digital technology to add large touch screens, printers, headphones, and cameras which would allow for video conferences. There would be no legal barriers to accessing library material and thus no need to ever close the library. It would become a great meeting place for researchers to clash their ideas.

Students from the Gliesian Universities wouldn’t be the happy people who never want what they can’t get since they could get – anything. Their teachers would serve as navigators through a huge bunker of open data but never as indoctrinators. There would be nothing to prevent some innovative student’s paper to spring from dusty shelf and integrate itself into a global pool of knowledge. No Gliesian would be used to wait another 100 years for transition in science or technology to happen. The only law representatives on the planet would be the head people from Creative Commons. In this way the authors would choose from licenses and decide what other Gliesians can distribute, edit or copy from their material.

“Space,” it says, “is big. Really big.You just won’t believe how vastly, hugely, mindbogglingly big it is.”
(Douglas Adams, The Hitchiker’s Guide to the Galaxy)

The knowledge must be the size of the space approximately, and so would be the libraries which would possess it. The open access to it would require guidelines everywhere, and one would avoid getting lost or mindboggled. However, it seems like we will have to wait another 100 years for this transition or emigration to the planet of limitless knowledge to happen. Are we hesitant to hear the answer from the super computer Deep Thought, to learn the ultimate answer to the ultimate question of life, the Universe, and everything? 42.